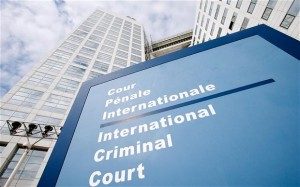 In 1998, the United Nations (UN) sponsored a conference to draft the Rome Treaty establishing the International Criminal Court (ICC) to deal with individuals who have been accused of committing genocide, crimes against humanity, and war crimes. The Court is not a part of the UN. Instead, it is an independent judicial institution. The ICC came into existence in 2002 with 60 separate countries agreeing to fund and cooperate with the Court. Today there are 120 countries that have ratified the Rome Treaty, with more countries joining regularly. The member countries pledge to support and recognize the authority of the Court.

Cases are only tried by the ICC when no nation is willing or able to genuinely prosecute them, and when the deeds that have been committed are of such a serious nature that they are fall within the Court’s jurisdiction. If the Prosecutor brings a case for crimes that the judges deem to be not sufficiently grave, they can dismiss the case.

The ICC has international jurisdiction, but it can only prosecute if the person who is accused of a crime is a citizen of a country that has ratified the ICC treaty, or if the crime occurred within a country that has also agreed to respect the power of the ICC, or if the UN Security Council votes to refer a situation or case to the ICC.

The court is separated into four divisions: the Presidency, Judicial Divisions, Office of the Prosecutor, and the Registry. There are three judges who make up the Presidency, and they hold the responsibility for the judicial administration of the ICC. 18 Judges are included in the Judicial Divisions, which consist of the Pre-Trial Division, Trial Division, and Appeals Division. The Prosecutor investigates, determines whether to bring charges, and then presents the case to the judges. Non-judicial administrative tasks that must be accomplished by the ICC is handled by the Registry. This division consists of the Registrar, who reports directly to the court President, and various administrative components. The Registry is also responsible for witness protection and victim issues.