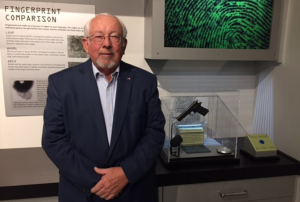 Sevier County native Arthur Bohanan will share his firsthand experiences as part of the forensic team that identified human remains at the World Trade Center after the September 11th attacks. He will share his personal feelings on those difficult days, and how the hazardous conditions at Ground Zero have since affected the lives of responders.

Arthur Bohanan was senior forensic examiner for 26 years with the Knoxville Police Department. As well as working on thousands of crime scenes, he’s done research with the FBI, Oak Ridge National Laboratory and the University of Tennessee’s Body Farm. He’s been on the response team to many large-scale disasters, including the World Trade Center, where he arrived on September 12, 2001.

While at the Knoxville Police Department, Bohanan led important research into the chemical differences between the fingerprints of children and adults, was involved in the start of the National Forensic Academy, and became one of the few Certified Latent Print Examiners in the world. In 1991 he began research into how to lift prints from corpses. Through trial and error, Bohanan invented a device using vaporized superglue blown onto the skin to make prints visible. Bohanan received a patent for the device, a case where a patent also includes the method. Today the CBC is manufactured and used by law enforcement around the world.

Back to Speaker Programs