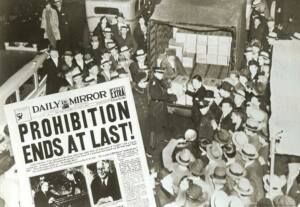 Prohibition was the period in which alcohol production and consumption were banned, creating the 18th Amendment to the Constitution. All states agreed to this amendment on January 16, 1919 but went into effect one year later on January 17, 1920. The 21st Amendment repealed this amendment which was ratified on December 5, 1933, ending Prohibition.

Join us for our first annual End of Prohibition event!
Date: December 5, 2020
Time: 5pm to Close

1. Wear Roaring ‘20s attire to get $5 off and get 2 entries to win a prize pack
2. Prohibition trivia
3. Free shooting gallery
4. Free digital photo (must be wearing noticeable Roaring 20’s attire)
5. Prizes from Junction 35 Spirits and Ole Smoky Distillery (must be 21 or older to win)

The event is included with a general ticket. Free image and discount are only available if you are dressed up in Roaring 20’s attire.