The episode of “Pawn Stars” that originally aired on August 14, 2017 featured the same original Bronco that is now on display at the museum! 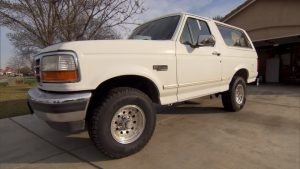 On June 17, 1994, over 95 million viewers were captivated when news broadcasts across the country cut into game five of the NBA Finals to show police in a slow speed pursuit with a white 1993 Ford Bronco on an empty California highway.

In the backseat was former NFL star O.J. Simpson with a gun threatening to kill himself. A warrant had just been issued for his arrest in the murders of his ex-wife Nicole Brown Simpson and Ronald Goldman on June 12th. They had been found brutally stabbed outside her home and Simpson was the prime suspect.

The Bronco was being driven by former NFL player Al Cowlings, Simpson’s friend and owner of the vehicle. Cowlings claimed that Simpson forced him into the vehicle, threatened him with his gun, to supposedly drive them to Nicole’s grave. The chase continued for roughly 2 hours, with police on the phone with Simpson, attempting to keep him from ending his life. The chase eventually ended at Simpson’s house in Brentwood where he surrendered to authorities. The now iconic footage of the chase was never shown during the trial.

Many people mistakenly believe that the Bronco from the chase was owned by O.J. Simpson. Both men owned the exact same make and model of vehicle because Cowlings had purchased his Bronco intentionally identical to one owned by Simpson. Simpson’s Bronco, however, had been found outside his home the night of the murders with traces of blood from both victims inside of it and seized as evidence.