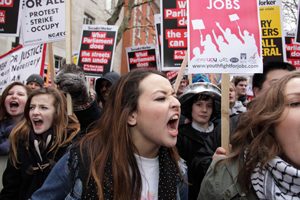 According to the National Advisory Committee on Criminal Justice Standards and Goals, there are six distinct types of terrorism. All of them share the common traits of being violent acts that destroy property, invoke fear and attempt to harm the lives of civilians.

1. Civil disorder is a sometimes violent form of protest held by a group of individuals, usually in opposition to a political policy or action. They are intended to send a message to a political group that “the people” are unhappy and demand change. The protests are intended to be non-violent, but they do sometimes result in large riots in which private property is destroyed and civilians are injured or killed.

2. Political terrorism is used by one political faction to intimidate another. Although government leaders are the ones who are intended to receive the ultimate message, it is the citizens who are targeted with violent attacks.

3. Non political terrorism is a terrorist act perpetrated by a group for any other purpose, most often of a religious nature. The desired goal is something other than a political objective, but the tactics involved are the same.

4. Quasi terrorism is a violent act that utilizes the same methods terrorists employ, but does not have the same motivating factors. Cases like this usually involve an armed criminal who is trying to escape from law enforcement utilizing civilians as hostages to help them escape. The law breaker is acting in a similar manner to a terrorist, but terrorism is not the goal.

5. Limited political terrorism acts are generally one time only plots to make a political or ideological statement. The goal is not to overthrow the government, but to protest a governmental policy or action.

6. State terrorism defines any violent action initiated by an existing government to achieve a particular goal. Most often this goal involves a conflict with another country.

Every type of terrorism utilizes distinct methods of violence to get their message across. They can be anything from assault weapons or explosive devices to toxic chemicals that are released into the air. These attacks may occur at any time or place, which makes them an extremely effective method of instilling terror and uncertainty into the general public.