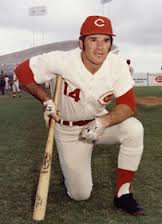 Pete Rose was born in Cincinnati, Ohio. When he was twenty-one years old, he entered Major League Baseball with the Cincinnati Reds. Rose became one of the greatest players in the history of professional baseball and was known to many as, “Charlie Hustle.”

After much investigation, it was found that Rose had illegally gambled and bet on baseball games, causing him to be permanently suspended from the sport. This supposedly occurred when Rose was serving as the manager of the Reds, and was prompted by rising suspicions surrounding Rose’s gambling habits. John Dowd, a former prosecutor for the Justice Department, launched an investigation and found that Rose had in fact, bet on baseball games. On August 23, 1989, Commissioner Bart Giamatti suspended Pete Rose from the sport of baseball for life. The year following the suspension, Rose served a five-month sentence in a federal correctional institution for tax evasion.

Rose has unsuccessfully applied for reinstatement to baseball. In 2004, Rose finally admitted to betting on games after years of denying the charges. To read more about Pete Rose, check out his autobiography, My Prison Without Bars.