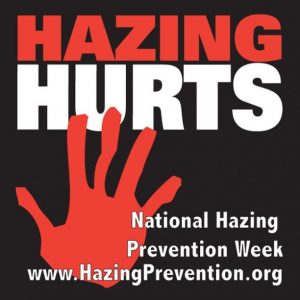 Hazing, according to StopHazing, hazing is, “Any activity expected of someone joining or participating in a group that humiliates, degrades, abuses, or endangers them regardless of a person’s willingness to participate.” Hazing is similar to bullying, but not the same, as it is done in order to induct members into a group, and people often may accept their hazing or want it in order to gain this membership.

The most common sources of hazing are collegiate. Clubs and activities may haze new members, but most hazing occurs in fraternities and sororities and on varsity athletic teams. These rituals are hard to regulate because they are seen as socially acceptable means of weeding out prospective new members. However, hazing can be dangerous and illegal.

Hazing commonly includes alcohol (commonly over-consumption and forced-consumption), sleep deprivation, or criticism by other members. Many adults are aware of hazing, sometimes even supporting it in coaching or alumni roles. This makes it particularly hard to understand exactly the legality involved with hazing.

However, hazing is a violation of many state laws and university policies. That being said, it still occurs today in countless groups and organizations.

Back to Silent Crimes