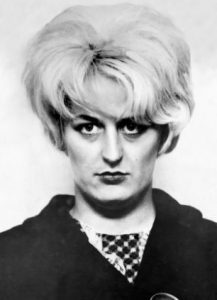 Myra Hindley was an English serial killer. With her partner, Ian Brady, she raped and murdered five small children.

Hindley grew up with her grandmother in Manchester, England. A close friend died when she was fifteen, causing her to leave school and take up Roman Catholicism. She met Ian Brady in 1961. Brady was recently released from prison and worked as a stock clerk when the two met. Brady had a strong influence over Hindley, she wrote, “I hope he loves me, and will marry me some day.” Hindley later noted that he was “cruel and selfish,” but added that she still “love[d] him.”

Brady tested her blind allegiance by including her on plans to rape and murder someone, and Hindley agreed. Pauline Reade, 16, was the first victim that they raped and murdered. Their other victims, John Kilbride, Keith Bennett, Lesley Ann Downey, and Edward Evans were all minors. Hindley’s brother witnessed the last murder and called the police. Brady told him that the others were buried on Saddleworth Moor, which coined them the Moor Murderers.

They stood trial in 1966 and pled not guilty to three of the five murders. Brady was found guilty of three murders and Hindley was found guilty of two murders, both sentenced to life. In 1970, Hindley broke all contact with Brady and in 1987, she released a full confession to the media in her involvement in the murders. She applied for parole many times, but all were denied.