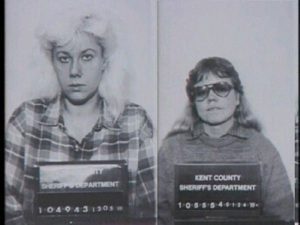 Gwendolyn Graham and Cathy Wood were nursing aides in Michigan’s Alpine Manor in the 1980s. Together, they murdered five patients with intent that their initials would spell “murder.”

After suffocating a few women patients, they abandoned the spelling plan, but the murders continued. The couple separated in 1987 and went on with their lives. Wood, feeling guilty, told her ex-husband about the murders and the police were informed in 1988.

Graham received five life sentences for the five murders and conspiracy to commit murder in 1989. She is still serving her sentence in the Huron Valley Correctional Complex.

Wood received a sentence based on her guilty plea of one charge of conspiracy to commit murder and one charge of second-degree murder. She received 40 years and has been eligible for parole since 2005. The parole board denied Wood’s parole eight times but granted it the ninth time, in 2018.