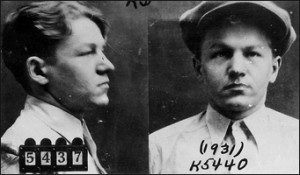 Baby Face Nelson was born on December 6, 1908. First known as Lester Gillis, he was in a youth gang. By 14, he had progressed to more impressive crimes, like car theft, and earned his nickname, “Baby Face,” because of how young he looked.

In 1928, Nelson met Helen Wawzynak, and the two married. He went to prison in 1931 for a bank robbery in Chicago, but escaped in 1932 and ran to California. There, he met John Chase. Soon after, in 1934, he met John Dillinger, and helped him commit even more robberies, taking lives in the process. When Dillinger was killed in 1934, Nelson became the new Public Enemy No. One.