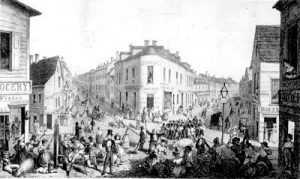 Organized crime as we recognize it today – a group of individuals working together to illicit profit through illegal and often violent methods – can be traced back to the street gangs of the 1800s. Notorious groups such as the Forty Thieves in New York formed as hundreds of immigrants came together for their own protection and financial gain. These people felt they could only rely on each other and saw organized crime as a means to improve their lives and find protection from other gangs and corrupt police officers. The Forty Thieves were made up of Irish-Americans who lived in slums and worked for low wages – if they could find work at all. Members were given criminal assignments and often received quotas for the number of illegal activities they were expected to commit. This gang became very successful and got involved in a wide array of activities, including politics. One of the best known members, William “Boss” Tweed, was even voted in as a public official and took charge of Tammany Hall, an affiliate of the New York Democratic Party. Tweed parlayed this position into a seat in the New York State Senate, but his career ended abruptly when he was sent to prison for corruption.

Although the Forty Thieves were prosperous, by the 1850s, the group had dissolved. Members left to join other gangs or start rival factions. These gangs were made up of desperately poor people who were grouped together by their ethnic backgrounds and lived in crowded slums. Organized crime groups continued to flourish over the next few decades, but the most notable example came from the Italian-Americans who formed the Mafia, or The American Cosa Nostra. Italian immigrants worked together to fight oppression and rise above the poverty level with methods such as selling stolen goods, extortion, prostitution, and other illegal activities to make money quickly.

Mafia organizations were recognized and feared, but it wasn’t until the time of Prohibition that they became as successful, established, and dangerous as they are now known to be. In 1920, the US government declared the manufacture or sale of alcohol to be illegal. Several competing groups of Italian crime families got involved in the production and distribution of alcohol during this nation-wide ban. The rivals often worked together, but it was also common for one family to take on another in a violent dispute with the hope of emerging as the leader of the profitable alcohol trade. This led to infamous incidents such as the St. Valentine’s Day Massacre, in which several members of Al Capone’s family pretended to be police officers and savagely gunned down seven rivals from the Moran crime family.

Throughout the era of Prohibition, organized crime families participated in bloody ambushes, using gang warfare tactics. Leaders such as “Lucky” Luciano and Al Capone became famous for bold criminal activities, and the FBI built cases against them. Violence between Mafioso families came to a boiling point in the 1930s when newly established crime factions declared war on existing Mafia groups. The Maranzano family was a particular target of interest for these younger criminals, and following a bloody coup, they took over and established themselves as the next generation of the American Mob.