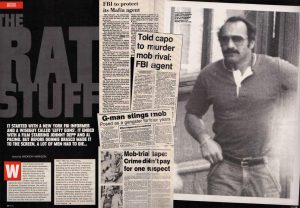 Joseph Pistone was an FBI agent born in Erie, Pennsylvania in 1939. He is well known for going undercover in the Bonanno Crime Family on behalf of the FBI. The FBI had never had an undercover agent infiltrate one of the famous Five Families of New York until Pistone.

Before going undercover, Pistone was sent to a school to learn about precious gems and given the pseudonym Donnie Brasco so that he could go undercover as a local jewel thief on the streets of New York. He would go to local bars almost every night, hoping that a local mafia member might meet up with him and accept him as an associate of the Bonanno Family. After going to a bar that was frequented by the Bonanno Family a local mob wife attempted to flirt with Pistone. He politely declined her advances and told the bartender, “She approached me.” This was a sign to the bartender that Pistone understood the code of the mafia and would not attempt to seduce a mobster’s wife.

Later, Pistone was approached by a man named Benjamin “Lefty” Ruggiero, who personally killed 26 men for the family. Pistone impressed him with the diamonds he had acquired from the FBI evidence room and his understanding of the jewels. Soon “Lefty” made Donnie Brasco his new business associate.

As an associate of the Bonanno Family, Donnie Brasco (Pistone) was ordered to carry out four hits for “Lefty.” The FBI helped Pistone stage the hits and usually just arrested those people and kept their names out of the papers so that it looked as though Pistone had killed them. But soon Carmine Galante (head of the Bananno family) was executed on July 12, 1979 and war broke out between rival Capos within the family.

The war escalated within the next two years as two local Capos, Dominick Napolitano and “Lefty” Ruggiero, killed three of the top leaders in the Bonanno Family. Finally in order to become a “made man” (the highest honor in the mafia) “Lefty” told Pistone he needed to kill Anthony Indelicato. When Pistone told the FBI he needed to stage this murder they refused to continue with the operation and pulled Pistone away from the undercover assignment.

The FBI had gathered enough information from wire taps and conversations between Pistone and mafia members that they could arrest and convict over 100 associates and local mobsters. The Commission of the mafia decided to put out a hit order on Joseph Pistone for half a million dollars due to the fact that he was an undercover FBI agent. The Commission had also ordered the death of Napolitano and Ruggiero for letting Pistone infiltrate the mafia and giving him so much information. Napolitano was quoted as saying, “I have no ill will towards Brasco, I loved the kid,” shortly before he was killed on August 17, 1981. Ruggiero was on his way to meet local Capos when he was arrested by the FBI. If he had not been arrested he would have walked into his own execution.

As a result of Operation Donnie Brasco, Joseph Pistone, his wife, and his three daughters now live under false names in an undisclosed location under FBI protection. The Commission have now created new rules that determine who can join the mafia. New members must kill someone in front of two made men and two members of a family must vouch for that associate with their own lives.