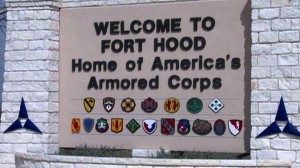 On November 5, 2009, tragedy struck the Fort Hood military base when a US Army major open fired on the base, killing 13 and injuring more than 30. Major Nidal Malik Hasan, who was not only an Army major, but a psychiatrist, was the gunman responsible for what would be the worst shooting to occur on an American military base.

Around 1:30 PM, Major Hasan entered the Soldier Readiness Processing Center, the place where soldiers go before deployment and when they return to the U.S. from deployment. He sat at a table and put his head down. Soon after, he stood up, shouted “Allahu Akbar!” and began to spray bullets at soldiers and then began targeting them individually. Several people charged at Hasan in efforts to halt his firing, but they were shot, some fatally, during these failed attempts.

Ft. Hood civilian police Sergeant Kimberly Munley arrived at the scene and began to exchange gunfire with Hasan outside of the processing center. After being hit twice, she fell to the ground, and Hasan kicked her gun away. Hasan continued to shoot as soldiers began to flee from the building, until civilian police soldier Sergeant Mark Todd shouted at him to surrender. Hasan did not surrender; instead he fired shots at Todd. Todd then shot at Hasan, shooting him several times until he fell to the ground. Todd was then able to handcuff Hasan.

The whole attack only lasted 10 minutes, but in that short period of time 11 people were killed and over 30 were injured. Two more people later died at the hospital. Hasan, who was shot several times in his spine, was paralyzed from the waist down.

Because of Hassan’s radical religious beliefs and his communication with an Islamic leader who was believed to be a security threat, some people considered the attack to be an act of terrorism. After further investigation, the FBI found no evidence that Hasan was part of a terrorist plot and determined that he acted alone in an attack described as an act of workplace violence.

Hasan, who represented himself in court, faced 13 counts of premeditated murder and 32 counts of attempted murder by the Army in his trial that began August 6, 2013. Hasan justified his actions, saying he had “switched sides” because the US was at war with Islam. Hasan was convicted on all charges and sentenced to death, making him only the 6th person on the military’s death row.

Back to Mass Murder