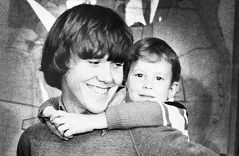 On December 4, 1972, seven-year-old Steven Stayner was walking home from school. He ran into a strange man collecting church donations. Innocent Steven Stayner noted that his mother might be interested in donating, to which the man, Kenneth Parnell, responded that he could drive young Stayner home so they could talk to her. Although Stayner at first was reluctant, he got in the car with Parnell, and that was the last anyone saw of Stayner for seven years.

While everyone was worrying over Stayner’s fate and possible demise, Stayner himself was forced to pretend he was Parnell’s son, “Dennis.” He didn’t understand that he had been kidnapped. Parnell told Stayner he had legal custody, and that Stayner’s parents no longer wanted him.

Stayner began to rebel as he grew older, no longer able to bear the torture that Parnell inflicted upon him. When, in 1980, Parnell kidnapped a young boy named Timmy White, it was the last straw for Stayner. Stayner snuck out and took White into town, where the police learned Stayner and White’s real identities.

Stayner was married in 1985 and had 2 children, but perished tragically in a motorcycle accident in 1989. Stayner was the younger sibling of Cary Stayner, the Yosemite Killer.