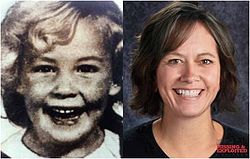 Anna Christian Waters was born on September 25, 1967. Anna’s parents parted ways after her father, George Waters, met a man named George Brody and entered into a relationship with him. At the age of 5, Anna went missing after playing in her backyard on January 16, 1973. Her mother became nervous when she could no longer hear her daughter playing with their cats and went outside to find her missing.

The search for Anna began by checking the Purisima Creek for her body. That day experienced heavy rains and the creek began to flood. After no body was found in the creek, the police turned their attention to possible suspects.

The primary targets of the investigation were George Waters, Anna’s father, and George Brody.  Two men, one older and one younger, were seen in the neighborhood that day which led the police to the assumption that Brody and Waters may have kidnapped Anna.

In 1981 both men died and police have had no leads since. The National Center for Missing and Exploited Children (NCMEC) believes that Anna may still be alive and have produced pictures of what she might look like today.

If you have any information please call local authorities or NCMEC.