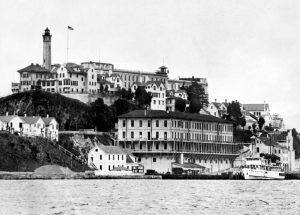 Alcatraz Federal Penitentiary was a maximum-security prison located on Alcatraz Island off the coast of San Francisco from 1934 until it closed in 1963. Popularly known as “The Rock,” on average there were about 260 prisoners incarcerated on Alcatraz at any given time. Alcatraz was used to house problem prisoners from other federal penitentiaries, particularly those who had escaped custody, but also held the most famous and dangerous prisoners in the country, such as Al Capone, Machine Gun Kelly, Alvin Karpis, and Whitey Bulger.

During the work week, the first bell rang at 6:30 in the morning waking prisoners for breakfast at 7:00. After breakfast, the inmates would go to their assigned jobs. There were many jobs on Alcatraz Island, including contract work for the military. Inside the cell blocks themselves, prisoners could work in the culinary, cleaning, maintenance, library, or gardening units. On the North side of the island there were factories where prisoners made items like rubber mats, shoes, gloves, raincoats, and furniture for use either by the military or the prison itself. During World War II, the mat factory-made cargo nets for the Merchant Marines and Navy.

Alcatraz received a reputation as one of the toughest prisons in America from its representation in Hollywood, but in reality, some prisoners would request transfers to the prison island. Unlike most federal prisons, Alcatraz had single person cells and good food. The prisoners could also watch movies and gain access to an extensive library as rewards for good behavior. During the week there was almost no time for prisoners to socialize. Talking was prohibited during meals and prisoners were locked in their cells by 4:50 PM. From final lock up to lights out at 9:00, the prisoners would read books and were allowed to practice instruments, but they could not talk to one another. During the weekends, the prisoners had the ability to spend their day in the Recreation Yard where they would play baseball and chess. The Yard was the only place inmates had a real opportunity to socialize with one another.

During its time as a federal penitentiary, 36 men were involved in 14 attempted escapes from The Rock. While most were shot, drowned, or quickly recaptured, there is one escape that is still thought by some to be the only successful escape from Alcatraz, that of brothers John and Clarence Anglin and Frank Morris on June 11, 1962. Their bodies were never found.

The prisoners were not Alcatraz’s only residents; about 300 civilians lived on the island, including the young families of the guards. The families lived in apartments on the South side of the island. Many former residents recount their time on Alcatraz fondly, saying it was similar to living on a small army base. Most civilians never interacted with the prisoners except for when they would collect laundry or garbage. Most shopping was done on the mainland, with regular ferries throughout the day, but there were some amenities on the island such as a commissary, bowling alley, a preschool, and a soda fountain.

Alcatraz was deemed too expensive to run, and closed for good in 1963. Since the day it opened its doors to the public as a National Park in 1972, Alcatraz has been a hit, receiving 1.5 million visitors annually.

Back to Famous Prisons & Incarceration