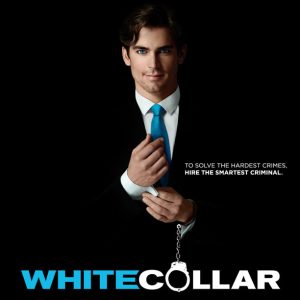 White Collar aired on USA starting in 2009. The series, produced by Jeff Eastin, is a procedural crime drama with a twist. One main character, Agent Peter Burke (Tim DeKay), works in the White Collar Crimes division of the FBI; his “partner,” Neal Caffrey (Matt Bomer) is a renowned white collar criminal and a charming con man. Although Peter is the one who puts Neal in prison, Peter later negotiates a deal to have Neal released, on one condition: Neal works with him to help catch other criminals. Though their partnership gets off to a rocky start, the two learn to work with one another to investigate white-collar crimes. The show also features subplots involving Peter’s wife Elizabeth (Tiffani Thiessen) and Neal’s partner in crime, the nerdy-yet-lovable Mozzie (Willie Garson), who can also provide comic relief to the dramatic show.

White Collar has received 8 award nominations. Although it was well received during the beginning of its run, a drop in viewership led to USA’s decision to end the series with an abridged six-episode season.

White Collar returned for its sixth and final season in July 2014.