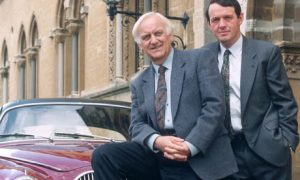 Inspector Morse was a crime drama that aired on PBS from 1987 to 2000. Starring the late John Thaw as the titular detective, Inspector Morse, the show followed him and his assistant, Det Sgt Lewis (Kevin Whately) as they solved crimes in the Oxford area. During the show’s 12 seasons, only 33 episodes aired; each was the length of a feature film.

The show was unique because of its main character, who is not immediately likable, is prickly and acts superior. He also has a healthy disrespect for authority. Det Sgt Lewis, his partner, is a stark contrast to Morse, and provides another outlet for the viewers to relate to.

The series is based on the Morse novels by Colin Dexter. Dexter appears in almost every episode of the television series in a small cameo, as a tribute to the books.

Inspector Morse was nominated for twelve awards and won nine others, including a BAFTA TV Award for Best Drama Series and Best Actor (John Thaw).