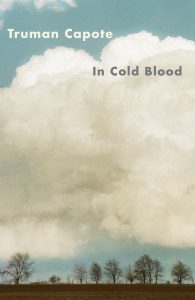 In Cold Blood is a non-fiction novel by Truman Capote published in 1966. It recounts the story of the murder of Herbert Clutter and his family in Holcomb, Kansas on November 15, 1959.

The crime seemed mysterious, as there were very few clues and no motives apparent to investigators. Capote read about the murders of the family of four in a newspaper article and decided that the story was intriguing enough for him to want to investigate it further. He spent almost five years researching the murder and following the court process. Capote claims that the whole book is true, and though he wrote it based on experiences and interviews he made, he does not appear in it.

Meanwhile, a prison inmate hears about the crime and believes that he knows who’s responsible – Dick Hickock. He makes the tough decision to talk to the police about the case and gives them the information they need to crack the murder case open.

Trying to evade capture, Dick and Perry steal a car and drive around the United States until they are caught. They are condemned to death by hanging.

The novel was originally released as a four-part series in The New Yorker in September 1965, causing the publication to continuously sell out. Random House picked it up for mass publication in 1966. The book also spawned a movie in 1967 starring Robert Blake and Scott Wilson. The book is available for purchase here.