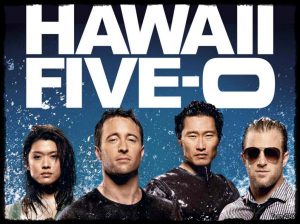 Hawaii Five-0 began airing on CBS in 2010. It is a remake of an older version of the same series. The show stars Alex O’Loughlin as Lieutenant Commander Steve McGarrett, who returns to Oahu, Hawaii, after his father is murdered. The governor, noting his qualifications – McGarrett is also a decorated officer of the Navy and has experience with the police force – asks McGarrett to stay on as a special detective. The incentive the governor offers is one that’s hard to turn down: a specialized task force, known as Five-0. McGarrett accepts, and ends up working with Detective Danny “Danno” Williams (Scott Caan), Lieutenant Chin Ho Kelly (Daniel Dae Kim), and Police Officer Kono Kalakaua (Grace Park). McGarrett tries to find his father’s murderer, but also must work with his new team, an unusual bunch of misfits, to solve a variety of crimes.

The episodes are generally able to stand alone, similar to other crime shows. In a tribute to the Hawaiian setting, each episode is titled in Hawaiian.

Angela N Crawford
2018-05-03T03:26:00+0000
Enjoyed my visit here today! I wasn’t sure what to expect, but loved seeing all the displays. A lot of informative details about past history. I wouldn’t suggest for younger children as it involves a lot of reading and some graphic details. A must see while in the Pigeon Forge, TN area.read more
Next Reviews