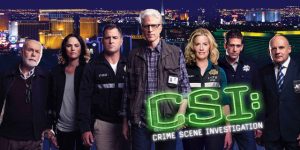 CSI: Crime Scene Investigation is a procedural crime drama that began airing on CBS in 2000. The show stars an ensemble cast of actors and weaves together drama and the scientific and procedural parts of solving a crime. However, its most featured characters are Nick Stokes (George Eads), Captain Jim Brass (Paul Guilfoyle), Greg Sanders (Eric Szmanda), and Dr. Al Robbins (Robert David Hall).

The fifteenth and final season concluded on September 27, 2015. It focused on a team of forensic experts in Las Vegas. They tend to focus on forensic evidence, which makes the stories less of a traditional mystery and more a question of how the culprit got away with it. The episodes tend to be standalone, making it very easy to watch the show without knowing the backstory of every character.

CBS offers various ways to engage with its show online, even a game, which allows viewers to engage even more with the show.

In 2007, TV.com reported that nearly 84 million people watched CSI, which would, according to the site, “make it the most watched show in the world.” Accordingly, CSI has received massive amounts of attention in press. The show received 126 nominations and won 64 awards.