In the early morning hours of December 26, 1996, John and Patsy Ramsey awoke to find their six-year-old daughter JonBenét Ramsey missing from her bed at their home in Boulder, Colorado. Patsy and John had woken up early to prepare for a trip, when Patsy discovered a ransom note on the stairs demanding $118,000 for their daughter’s safe return.

Despite the note’s warning not to involve police, Patsy immediately called them, as well as friends and family in order to aid in the search for JonBenét. Police arrived at 5:55 AM and found no signs of forced entry, but did not search the basement, where her body would eventually be found.

Before JonBenét’s body was even found, there were many investigative mistakes made. Only JonBenét’s room was cornered off, so friends and family roamed the rest of the house, picking up things and potentially destroying evidence. The Boulder Police Department also shared evidence they found with the Ramseys and delayed conducting their informal interviews with the parents. At 1:00 PM the detectives instructed Mr. Ramsey and a family friend to go around the house to see if anything was amiss. The first place they looked was the basement, where they found JonBenét’s body. John Ramsey immediately picked up his daughter’s body and brought her upstairs, which unfortunately destroyed potential evidence by disturbing the crime scene.

During the autopsy it was discovered that JonBenét had died from asphyxiation due to strangulation, in addition to a skull fracture. Her mouth had been covered in duct tape and her wrists and neck were wrapped with a white cord. Her torso had been covered in a white blanket. There was no conclusive evidence of rape as no semen was found on the body and her vagina appeared to have been wiped clean, although a sexual assault had occurred. The makeshift garret was made using a length of cord and part of a paintbrush from the basement. The coroner also found what was believed to be pineapple in JonBenét’s stomach. Her parents do not remember giving her any the night before she died, but there was a bowl of pineapple in the kitchen which had her nine-year-old brother Burke’s fingerprints on it, however this meant little since time cannot be attributed to fingerprints. The Ramseys maintained Burke was in his room all night asleep, and there was never any physical evidence to reflect otherwise. 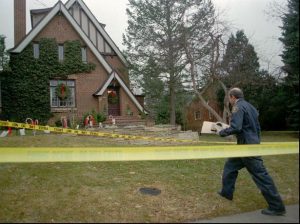 There are two popular theories in the Ramsey case; the family theory and the intruder theory. The initial investigation focused heavily on the Ramsey family for many reasons. The police felt that the ransom note was staged as it was unusually long, written using a pen and paper from the Ramsey’s house, and demanded almost the exact amount of money that John had received as a bonus earlier that year. Additionally, the Ramseys were reluctant to cooperate with police, though they later said this was because they feared the police would not conduct a full investigation and target at them as easy suspects. However all three members of the immediate family were questioned by investigators and submitting handwriting samples to compare to the ransom letter. Both John and Burke were cleared of any suspicion of writing the note. Although much was made that Patsy could not be conclusively cleared by her handwriting sample, this analysis was not further supported by any other evidence.

Despite a larger pool of suspects, the media immediately focused on JonBenét’s parents, and they spent years under the harsh limelight of the public eye. In 1999, a Colorado grand jury voted to indict the Ramseys on child endangerment and obstruction of a murder investigation, however the prosecutor felt that the evidence did not meet the beyond a reasonable doubt standard and declined to prosecute. JonBenét’s parents were never officially named as suspects in the murder.

Alternatively, the intruder theory had lots of physical evidence to support it. There was a boot print found next to JonBenét’s body which did not belong to anyone in the family. There was also a broken window in the basement which was believed to be the most likely point of entry for an intruder. Additionally, there was DNA from drops of blood from an unknown male found on her underwear. The floors in the Ramsey’s home were heavily carpeted, making it plausible for an intruder to have carried JonBenét downstairs without waking the family.

One of the most famous suspects was John Karr. He was arrested in 2006 when he confessed to killing JonBenét by accident, after he had drugged and sexually assaulted her. Karr was eventually dismissed as a suspect after it was revealed that no drugs had been found in JonBenét’s system, police could not confirm he was in Boulder at the time, and his DNA did not match the profile generated from the samples found.

Much of the recent investigation in the case revolves around the DNA profiles developed from the sample found in her underwear and the touch DNA later developed from her long johns. The profile from her underwear was entered into CODIS (the national DNA database) in 2003, but no matches have been identified.

In 2006, Boulder District Attorney Mary Lacy took over the case. She agreed with the federal prosecutor that the intruder theory was more plausible than the Ramseys killing their daughter. Under Lacy’s lead, investigators developed a DNA profile from touch DNA (DNA left behind by skin cells) on her long johns. In 2008 Lacy released a statement detailing the DNA evidence and fully exonerating the Ramsey family, saying in part:

“The Boulder District Attorney’s Office does not consider any member of the Ramsey family, including John, Patsy, or Burke Ramsey, as suspects in this case. We make this announcement now because we have recently obtained this new scientific evidence that adds significantly to the exculpatory value of the previous scientific evidence. We do so with full appreciation for the other evidence in this case.

Local, national, and even international publicity has focused on the murder of JonBenet Ramsey. Many members of the public came to believe that one or more of the Ramseys, including her mother or her father or even her brother, were responsible for this brutal homicide. Those suspicions were not based on evidence that had been tested in court; rather, they were based on evidence reported by the media.”

In 2010 the case was officially reopened with renewed focus on the DNA samples. Further testing has been conducted on the samples and experts now believe that the sample is actually from two individuals rather than one. In 2016 it was announced that the DNA would be sent to the Colorado Bureau of Investigation to be tested using more modern methods and authorities hope to develop an even stronger DNA profile of the killer.

In 2016, CBS aired The Case of JonBenét Ramsey which implied her then nine-year-old brother Burke was the killer despite the fact he was cleared by the DNA evidence that proved the existence of an intruder. Burke filed a $750 million-dollar lawsuit against CBS for defamation. The case was settled in 2019, and while the terms of the settlement were not disclosed, his lawyer stated the case was “amicably resolved to the satisfaction of all parties.” 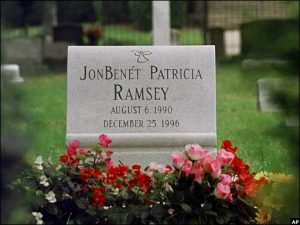 The case is still open and remains unsolved.

Back to Cold Cases