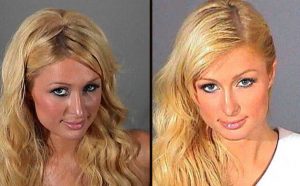 Paris Hilton, famed party girl and heiress to the Hilton family, has been in trouble with the law many times.

Hilton was first arrested in 2006 when she was found driving under the influence, suspending her license. She was pulled over multiple times for continuing to drive with an invalid license.

In 2010, Hilton was arrested for a more grievous offense. Hilton was found in a car in Las Vegas with boyfriend Cy Waits. Marijuana smoke was wafting from the car, so officers investigated. Hilton was charged for possession of marijuana and cocaine.

Hilton pled guilty to drug possession and obstructing an officer. She did not receive prison time, but a years’ probation, community service, and a fine. The only jail time that Hilton was sentenced to was for a probation violation in 2007. Her original sentence was 45 days, but she was released after 23 days for good behavior.